In the next few weeks a documentary film entitled; “The Last Farewell” will be released.

The Amatuer video film of the last voyage of the RMS produced by videographer and Island media legend Tony Leo for T.L. Productions will become available for sale shortly 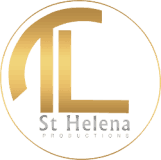 TL Productions St Helena Island
St. Helenian born Tony Leo and his wife Diana decided to book an RMS cruise holiday on the last returning voyage to the UK, something neither of them had done before.

The RMS St Helena shipping agents announced in May 2015, a year in advance that booking’s for this historic voyage could be made with Solomon’s Shipping Office in Jamestown. After the final decision was made to produce this film of the voyage, Tony began planning well in advance, until he was finally ready for the trip on 22nd May 2016 when the RMS St Helena weighed anchor in James Bay and he departed St Helena for the UK via Ascension Island and Tenerife.

Almost everyone on board were tourists and not the normal saint travellers seeking jobs off shore and returning to work. Having set the story line for this voyage, He started filming at the onset of the voyage and captured all of the activities en-route. At the end of the journey he had captured many hours of footage, all taken in high definition for good quality film production. 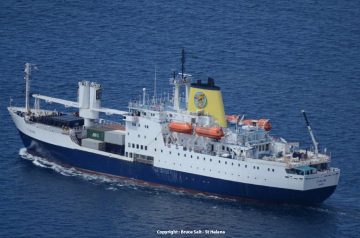 RMS departing St Helena
Passengers who travelled on board (mostly Saints) had a wonderful time and enjoyed every moment of the journey. The voyage was so memorable, that it was difficult to determine what were the highlights of the voyage.

Was it the London arrival?

Was it the UK departure?

Was it the return to St Helena?

All of this and more was captured on “The last farewell”

“This documentary film of the last remaining Royal Mail Ship, is truly a masterpiece and will become a collector’s item in years to come” said Tony.

This film is a true Saint production.

The cameraman is a Saint.

A saint directed it,

A saint edit, scripted and narrated it. 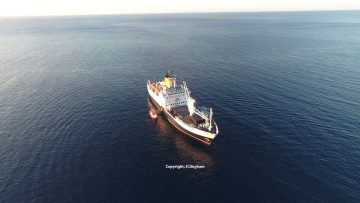 Aerial view of The RMS St Helena
The RMS St. Helena was a purpose built ship designed to serve all three islands in the South Atlantic and has been in operation for over 26 years.

The RMS has served the Island well, it has transported just about everybody and everything to St Helena, whether it be a needle, a bulldozer or livestock, it all had to be transported on the RMS…

The RMS has travelled from Cape Town to the United Kingdom and returned, calling at St Helena and Ascension Island. It was and still is the island’s lifeline.

The RMS is subsidised by the British Government and after much debate, Britain decided that the time was right, for the island to be given better access, which resulted in the building of an Airport.

Having the airport with regular tourists visiting, this would kick-start the economy and the benefit deriving from this, would mean economic growth, where Saints would provide all the needs for tourists. The voyage to the UK in May 2016 was the final one for the RMS, after which she would proceed to Cape Town and would then be sold to her new owners. However, during the voyage north, an official announcement was made informing the public that some safety issues were identified at the newly built Islands Airport, wind shear being one of the contributing factors. It was thus decided by the powers that be, that the RMS St. Helena should continue the shipping service to the Islands for another two years, while the airport issues are being sorted out. So what was supposed to have been the final Royal Mail Ship voyage, ending in Cape Town, had then to be rescheduled? The Island will still enjoy the RMS shipping service for another two years but she will be sadly missed when the time comes, for her to finally go off line.

Making of the Film

The financial constraints in the making compilation of this film were huge where additional equipment was necessary, new editing software had to be purchased; a tailor-made computer was sourced to manage the many hours of high definition footage captured on camera of the voyage. A new learning curve, for using new software had to be overcome, plus the crucial decisions on how the film would be mastered for the audience for which it is intended. Tony has made many short documentaries before and he has worked with some of the Island’s key clients such as Enterprise St. Helena, The Education Directorate, Basil Read Construction Company, The National Geographic Magazine. However, he has never produced anything on the scale of this documentary film. During the collation of the film I asked Tony if he had any disappointments relating to its production, he said that there was some material that had to be left out whilst still maintaining the story line.

St. Helena Local and Reach Back St. Helena have been instrumental in the delivery of this film hope you will enjoy this film.

If you have travelled on the RMS St Helena during the time she has been in service, over the last 26 years, then watching this documentary should bring back many happy memories.

You can also use our contact page to get in touch or register your interest here if you would like to know more about when this film becomes available.

Feel free to share this with any of your friends.

A trailer of The last farewell is now available on line.