The upgrade which was done in 2012 included fitting an additional 24 cabin berths and a new gym. The ship has been the only bridge between St Helena Island and the World since it commenced its services in 1990. It was however launched by Prince Andrew on 31st October 1989. The RMS St Helena has been of service to the Saints for almost 26 years. The RMS St Helena and Cunard’s Queen Mary are the only two Royal Mail Ships designated passenger vessels remaining worldwide.

RMS Funnel Deck
The ship has been the only means of getting supplies to St Helena over the years it has been in operation. It has been responsible of ensuring that the St Helena have access to household goods, food, cars, tools, automotive spare parts, paint, wind turbines and clothes. That’s not all as animals such as goats, sheep, and cattle all arrive to the Island aboard the ship. 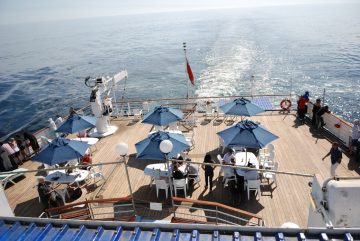 The ship used to operate the UK to St Helena route. Today it mainly operates from Cape Town to Ascension with occasional voyages to Tristan da Cunha. The Crew are said to be familiar with the inhabitants to an extent of knowing which cargo belongs to whom and so forth.

The opening of the airport on 21st May 2016 will bring a sigh of relief to St Helena, due to the many random failures over the years, on one occasion the RMS had an engine failure, This meant that the passengers and cargo it was ferrying to St Helena were delayed in getting home, after a quick reaction from the ships operators the MV Jason a smaller replacement ship was chartered from Greece to complete the journey to the Island in time for Christmas.

The inhabitants will miss the unique experience the ship has offered for the past 25 years across the South Atlantic which is coming to an end in just under 100 days’ time. The RMS St Helena will remain as one the most important things in the Islands history. Its fame will be as memorable in St Helena as that of Napoleon and Jonathan the tortoise.