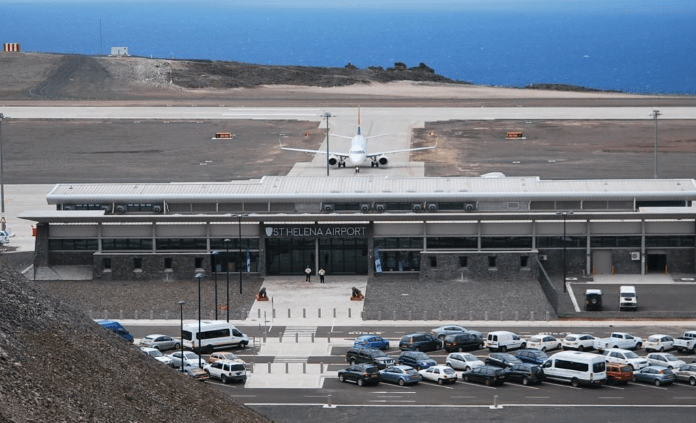 After a night of heavy dewfall St Helena woke up to a bright sunny day. Today was the 3rd May 2017 the day that another legacy will be made as St Helena awaited the arrival of the Avero RJ 85. It would appear that nothing would deter the many Islanders from making that long trip to the St Helena Airport to view this momentous flight touching down on runway 20.

This would be the maiden flight for a commercial aircraft to bring passengers to St Helena. The Avero RJ 85 operated by SA Air link safely landed with sixty passengers onboard, the majority of whom were returning Saints that were left stranded in South Africa after the Royal Mail Ship the RMS St. Helena developed a further problem with its starboard propeller.

The flight was also considered as a humanitarian one following the successful negotiations between the St Helena Government and DFID in London to address RMS passengers stranded in Capetown. After breaking down for the second time the RMS had to disembark its passengers and cargoes in Capetown and proceed to another dry dock in Simons Town.

The SA Airlink Avero RJ 85 touchdown at St. Helena at approximately 14.55 hours GMT with blue skies and wind speed of around 15mph registered on the runway. The landing of the SAAirlinkRJ-85 Flight SA8878 appear near perfect.

SA Airlink RJ 85 arrival at St Helena
The Airport terminal building was teaming with excitement as approximately three hundred people watched the sixty passengers disembarked the aircraft from the restaurant viewing deck. It was said that the flight was smooth and pleasant, the passengers enjoyed the flight which took seven hours from Capetown via Namibia for a refuel.

Besides the family members of passengers arriving, many were just onlookers to witness this historic moment seeing the passengers stepping off the SA Airlink RJ-85 Jet and making their way to the terminal building. Following the disembarkation most onlookers and family members went to the arrival lounge to greet the arriving passengers.

The cleaning and refuelling of the aircraft took just under an hour the plane was ready to embark her passengers for the return flight to South Africa. As soon as its eighty seats were filled the engines were roaring into action proceeded down the runway ready for take-off.

A full car park at St Helena Airport
This is another milestone for St. Helena and will be long remembered as the first aircraft to land with sixty passengers. It was said that the captain of the RJ-85 had no difficulty in landing the aircraft on runway 20 which is the end that is supposedly plagued by wind shear. Due to its design, this aircraft uses only a small portion of the runway for landing and take-offs and today was an outstanding performance by an Avero RJ 85.

Atlantic Star Airlines with Tronis jet also landed a similar type aircraft on St Helena last year without passengers. This also was a historic test flight that many onlookers enjoyed following the problematic flight by ComAir using the 737 .